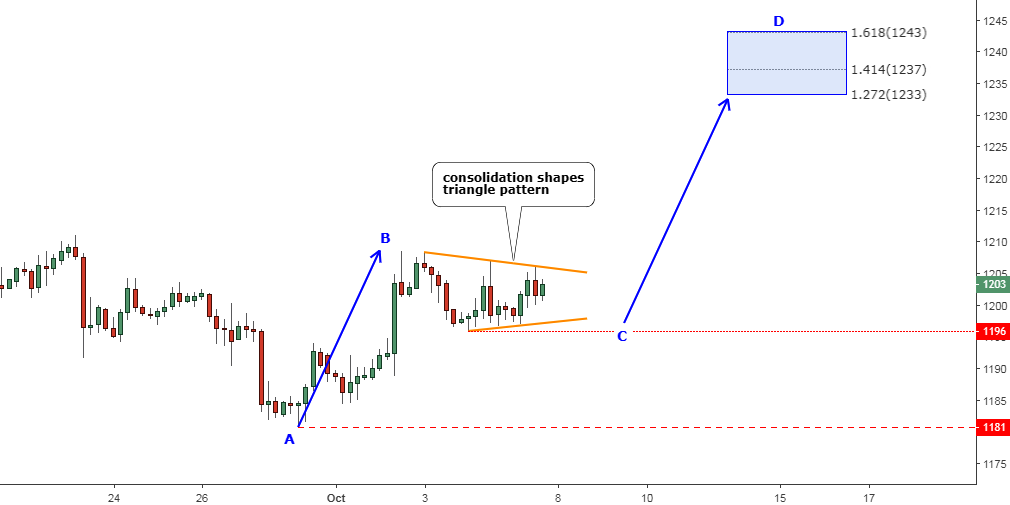 Gold has already booked more than $20 from the low established on the 28th of September at the $1181. Now, there is no doubt that the pullback I mentioned in the middle of September has been in progress.

After hitting the $1209 area, gold halted its move to the upside and started a consolidation. I marked that move as the AB segment (up blue arrow). I always mention the tricky nature of corrective structures as it may vary on the fly. The shape of consolidation could be as a counter-trend zigzag, could fit into a rectangle or form a triangle. The latter has been shaped in our chart above as the combination of lower peaks and higher troughs. I highlighted it with the converging trendlines (orange).

Those who enter the market on the second leg (CD segment) have one good advantage – once the first move in the AB segment is finished, we can use its distance to measure the target for the final move. We need only to wait for the consolidation to finish adding the AB segment’s distance to its lowest point.

I assume that another drop to the lower side of the triangle could occur before the market resumes its growth. The contact point is around $1198. So, I added the distance of the AB segment to this level, but instead of using equal size where CD=AB=$1226 I applied the extensions using Fibonacci ratios: 1.272, 1.414 and 1.618. The reason for this is the simple compliance of the target area with the level calculated in the bigger time frame (daily chart) in my earlier post, where the CD=AB around $1237. The D point set using extensions on the chart above hits right in that area between $1233 and $1243.

The triangle will be invalidated once the price breaks below the deepest point established at $1196. The whole pullback will be terminated if we see the gold below $1181.

Silver has finally built a clearer structure on the chart moving with a wide step between the $14.18 low and $14.91 high, which was marked as the AB segment (up blue arrow). This move to the upside now has been retraced within an orange downtrend. That corrective structure in silver differs from the triangular type consolidation that we have in gold as lower valleys appeared here one by one.

Observe the orange downtrend as a breakout could appear sooner or later. The trader could face a dilemma here when trying to measure the CD segment as we can see either another drop down or an immediate move up to break up the downtrend. I kept to the conservative approach and set the C point on the downside of the orange channel at $14.42.

To measure the target, I applied the equal distance (CD=AB, 1) as well as the extension ratios (1.272, 1.414 and 1.618). To remind you, I excluded the equal distance in the gold chart due to its falling out of the bigger time frame target range. In the silver chart, we have additional resistance level at $15, which was highlighted in my previous chart and the equal distance target of CD=AB ($15.14) hits just above that round number of resistance. The highest target at the 1.618 ratio ($15.58) aims right at the second resistance area ($15.61).

Silver has only one invalidation level in the chart compared to two levels in the gold chart as a triangle has its own termination point. The break below the initial point of growth of the second leg of a pullback at the $14.18 would be critical.

3 thoughts on “Gold & Silver: Get Ready For A Final Shot”